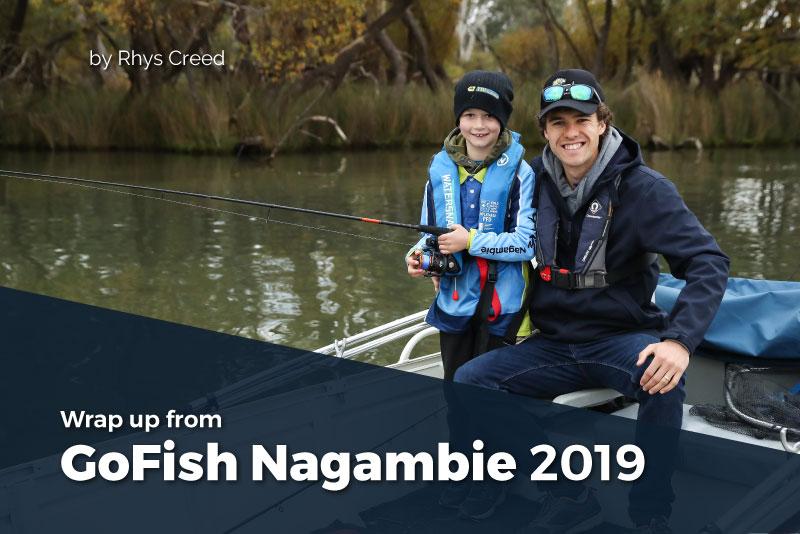 Wrap Up from GoFish Nagambie 2019

GoFish Nagambie 2019 was set to be Australia’s richest and biggest fishing competition – and it was a massive success! It was the events first year that ran across four days,
April 25-18.

Rewind 6 months… no one knew or had even heard of GoFish Nagambie, and now it’s been one of the most successful ‘Fishing Events’ that we have ever seen, and it’s set to GROW! Everyone had expectations for GoFish Nagambie, but they were all blown out of the water, with everything you could ever want as an angler.

The Beginnings of the ‘GoFish’ Concept

I was lucky enough to be included from the very start and was asked to be the Ambassador for GoFish Nagambie. When I was first introduced it was still at the very beginning, just as an idea. I was ecstatic to have even been considered for such an event of this scale.

I was told that there was going to be a massive fishing competition, with $500,000 worth of prizes, held in Nagambie and they needed someone who knew lots about Murray Cod, to be the face of the event. I was honoured that I was asked!

I also couldn’t believe that half a million dollars was going to be given away in a fishing comp, based in the freshwater, targeting Murray Cod. That was just insane and I knew it was going to be a BIG deal!

I worked with the GoFish Team and contributed my knowledge on fishing to help them plan the best event possible, including a training day down at Nagambie to teach them how to fish. I did a presentation and taught them how to cast. Mitch Condell from the SF Team was a great guide on this trip and he also landed a cracking cod in the heart of winter which become the hero shot of GoFish Nagambie! You’ve probably seen this picture before…. 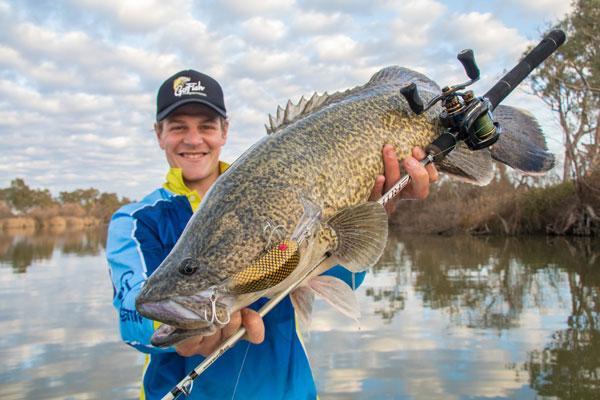 This photo of this Nagambie Cod and Mitchell Condell became the face of GoFish Nagambie!

Over the months following the hype of this event spread quickly with so many anglers asking questions about GoFish Nagambie. Things like:

I answered so many questions for so many excited anglers as the buzz began to grow. The GoFish team also kept everyone up to date via the email list and Facebook group and did an incredible job. Anglers were all informed of best techniques for the lake, rules and regulations on the competition, and the entertainment and festival.

I was lucky enough to fish the lake on multiple occasions and in the process catching some great fish. Only a month before the event I visited the lake with Paul Worsteling and the IFISH crew to film an episode for his latest series which aired prior to the competition.

We had an incredible trip and managed to catch five quality Murray Cod before lunch time with one big cod measuring 80cm in length, well above average for this system. 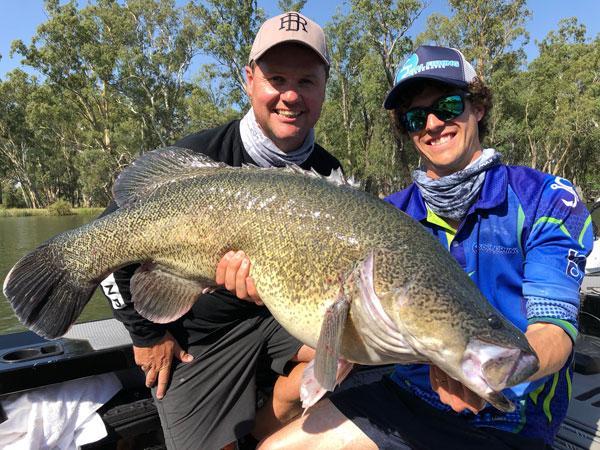 Paul and Rhys had an incredible session down at Nagambie prior to the event!

The Event and Festival

I arrived at the event on Wednesday afternoon and couldn’t believe the setup of the festival and expo hub! It was much bigger than I expected with a huge stage and screen, food vendors everywhere and plenty of exhibitors with everything from fishing gear, to boats, outdoor equipment and education.

We setup our Social Fishing stall in the expo hub and had lures, DVD, shirts and hats available across the weekend. Arriving into the caravan park that night it was extremely quiet, as was the town… it was the calm before the storm. 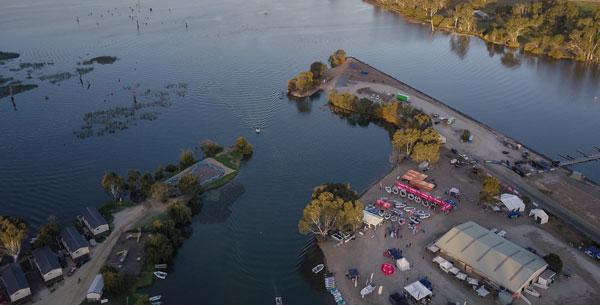 The GoFish Nagambie Expo prior to the start of Day1

Thursday the expo opened at 1pm and there were anglers everywhere! We honestly didn’t expect many on Thursday but all the competitors had to register between 1-7pm and they walked around the entire expo and restocked their gear ready for competition.

The competition started at daylight on Friday as everyone hit the water chasing that winning fish. Many anglers were asking if I was fishing but I was actually back at the expo which had over 500 school kids come through on Friday. These kids went around the expo in groups doing different activities and I was teaching kids how to cast and explained different types of lures that we use for Murray Cod. It was a great day and the kids had a ball. 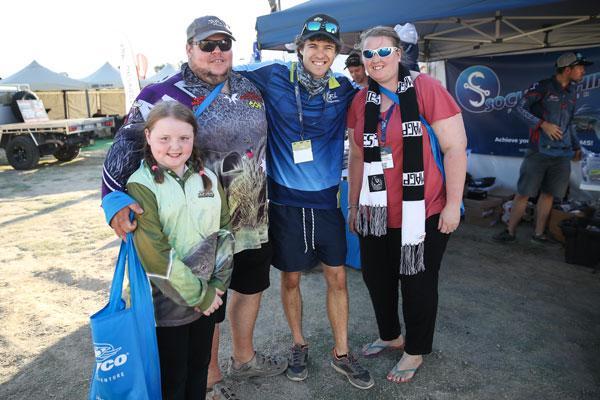 It was great to meet and talk to keen anglers and their families.

I was also helping the GoFish team collect content for the daily wrap ups and was sharing tips for competitors that were shared via social media.

I met so many incredible people and it was great to speak to everyone who came over and said hello. I met some long time followers of Social Fishing and I really enjoyed meeting and receiving feedback from everyone. It’s great to know that the work that I and the team do helps and provides value to so many keen anglers.

I was lucky enough to speak on stage each night with Paul and give a daily wrap from each day. I also spoke to all the stakeholders who were involved in GoFish. 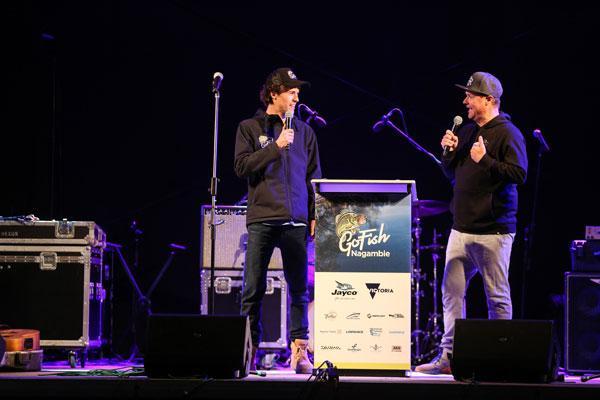 Daily Wraps from each day with Paul and Rhys

The entire setup with the Fishing Competition, mixed with the Expo and the Festival was something we have never seen before in the fishing world. It worked so well with such incredible night time entertainment and even fireworks on the Saturday night.

The Competition, Winners and Prizes

The competition ran across two and a half days, starting on the Friday morning at first light. Most anglers were up before dawn and hitting the water for their chance at landing that winning fish.

If you didn’t already know, that winning fish… the biggest Murray Cod, was worth $80,000! CASH! That was the major prize that everyone was after… but in saying that there were plenty more prizes on offer. There were 3 Jacyo JTRAK Campers to give away each day for what was called ‘Cod O’clock’. For those who don’t know anything about ‘Cod O’clock’ it’s a random hour that was chosen each day, where a random sized cod was selected. Anglers were notified via the app and social media and he first person to catch a fish matching that size or nearest to, wins the camper.

There was also a ‘Carp O’clock’ which is the same principle, but the winners took home a boat and trailer package. Other cash prizes like $20,000 for the biggest Golden Perch and Champion Angler prizes as well which included total overall length. To summarise… there were masses of prizes given away over the weekend! 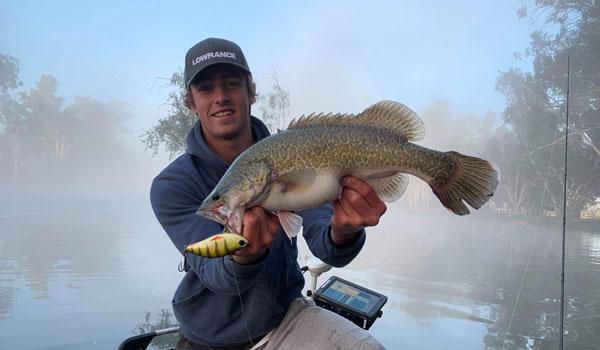 The first morning was extremely cold and very windy which made the fishing conditions tough. With this cold snap it shut the fish down and anglers did struggle over the entire weekend. In saying that, 1,150 fish were landed between 2,300 competitors throughout the duration of the event.

The winner was Clint Alvey with his cracking 110cm Murray Cod caught casting a spinnerbait on the afternoon of the first morning! Clint caught him self an $80,000 Murray Cod! 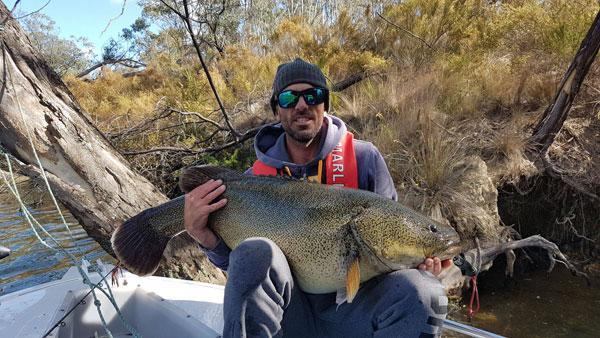 Highlight from the Event

Even though I wasn’t fishing the competition I had a great weekend meeting so many keen anglers who loved to share a story and talk about the passion we all share. The one highlight that is at the top of my list of many from the weekend, would be meeting an extremely keen young angler Riley (8) and his Dad (Dan).

I met Riley at the expo with his Dad before bumping into him again out on the water on Sunday morning. Dan was telling me how keen Riley is with his fishing and how he is happy to spend all day on the water without getting a hit and is still keen to head out the next day. Riley was casting lures and even without a fish all weekend, his Dad couldn’t convince him to swap to bait… he just loves casting lures. 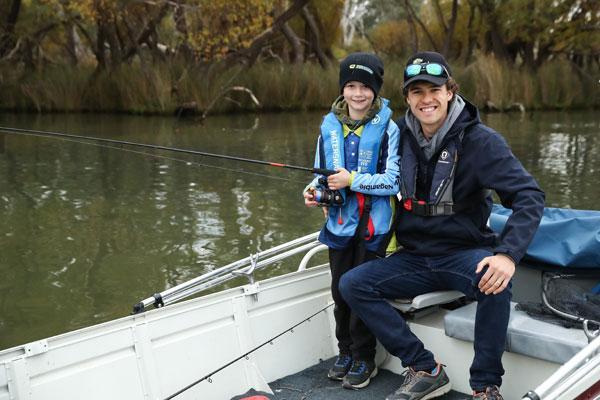 Rhys Creed with young champion angler Riley (8) who is a young star who loves casting lures!

I’ve never seen such a dedicated kid cast lures all day. I was lucky enough to interview Riley and I asked him why he loves fishing so much and this is what he said, “I love fishing because you might go all day and it could be the very last cast that the fish eats your lure.”

How’s this for the mindset of never give up? His Dad, Dan said that supposedly they are booked in for next year already. 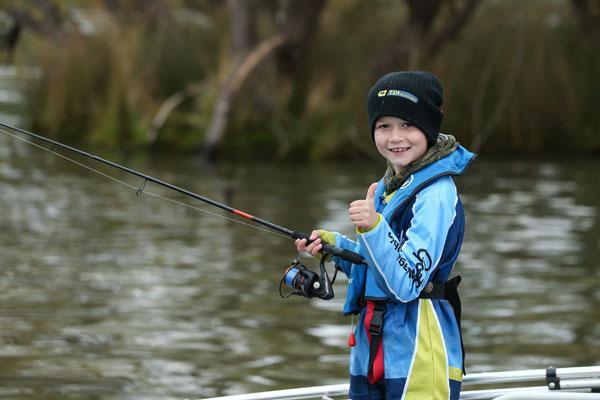 Riley (8) having fun and casting lures at GoFish Nagambie

So… what’s next for GoFish? Well I’m excited to say it’ll be back next year even bigger and better! If you fished the competition you may know that there are some small issues, which is always bound to happen with a first-time event.

The app was problematic for many anglers and this is something that will be improved for round two. Another thing that was mentioned by anglers was the temperature and how the event may have been a few weeks too late.

The GoFish team are already looking at bringing it forward so that the weather is warmer, and the fish are still biting!

So, make sure you keep your eyes out for details on next years dates and trust me… this event is going to get even bigger and will sell out extremely fast, so be ready and book your place as soon as you can.

Thanks for such a great event everyone and I can’t wait to see you there next year. 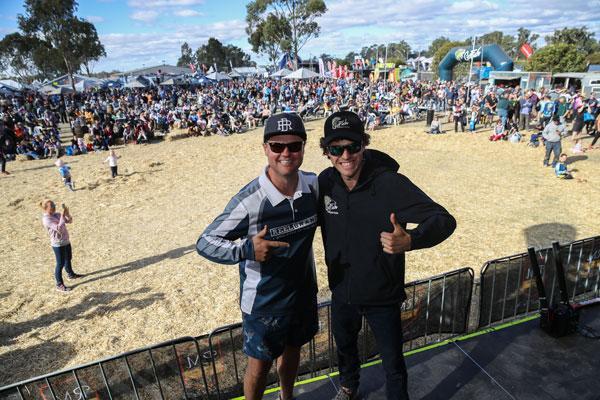 We can't wait to see you next year at GoFish Nagambie 2020!