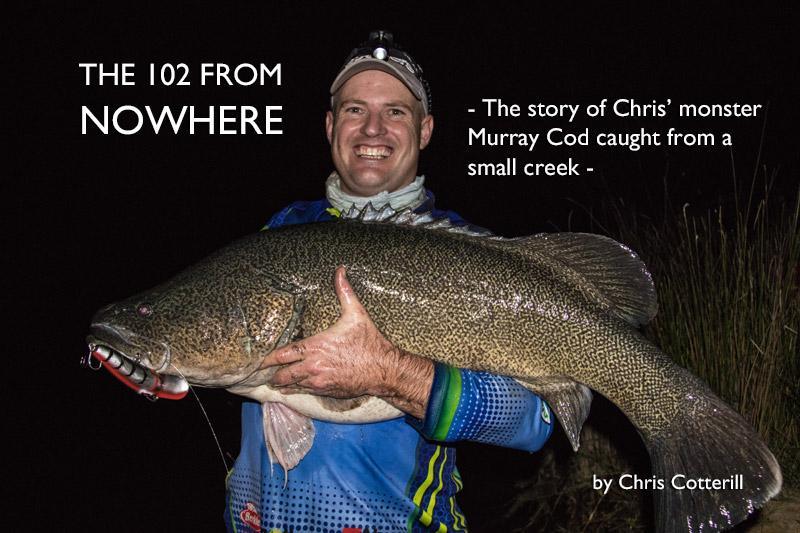 The stage was set for the Social Fishing team to film our much-anticipated small creeks and streams Murray Cod on Surface Tutorial for the Complete Guide Series, after our previous attempt to film this tutorial was marred with poor audio and missed strikes. Hours of work had to be scrapped and re-filmed to ensure we had the best quality footage before we put up the tutorial for you fine people to see.

But trying to get a camera crew and tutorial hosts to meet all on one designated weekend can be tough. The one weekend we were all able to do the shoot happened to be on the weekend of the new moon and as with the new moon we had not a glimpse of moonlight to assist the filming during the night. But we persevered and started to film once we got to our desired stretch of creek.

The afternoon bite was fantastic and in the low light the fish took our surface offerings freely but I had my doubts that that when the night fell and turned pitch black that the fish may find it difficult to hit our top water offerings. But more so we would find it increasingly difficult not to hang our surface lures up in trees like Christmas decorations.

Photos from the trip… 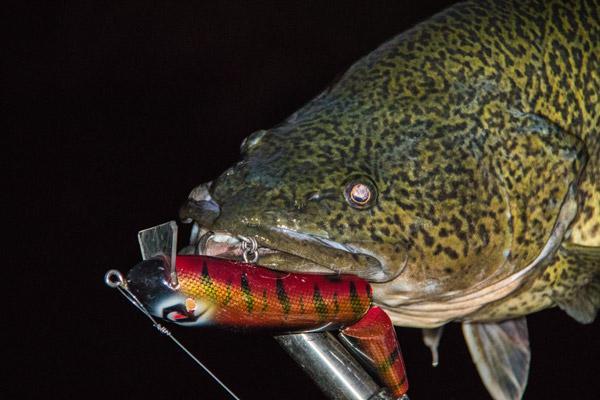 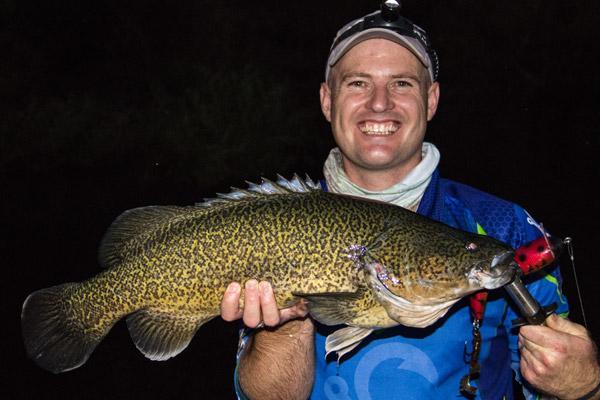 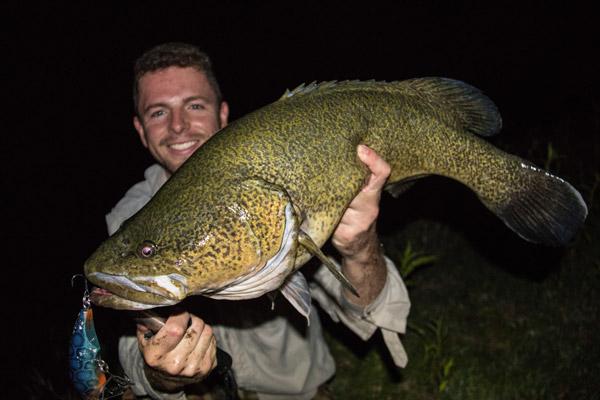 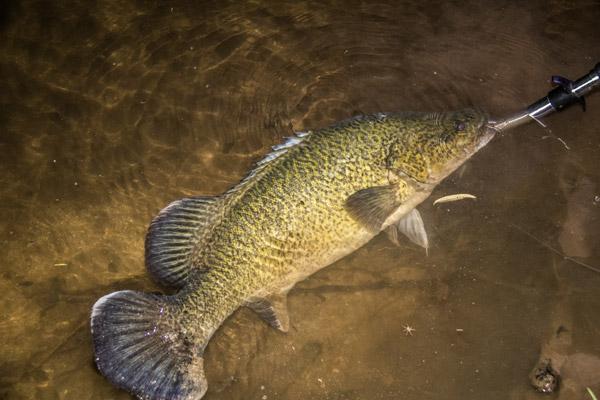 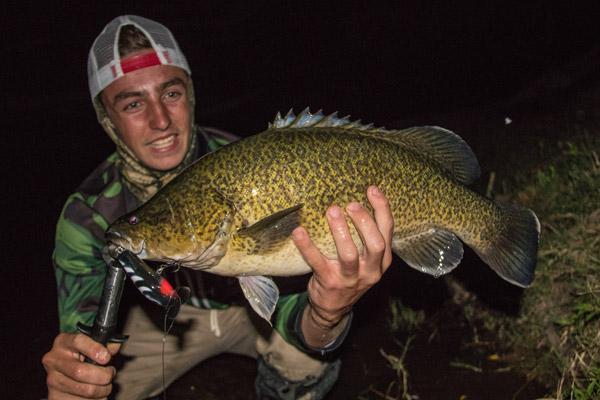 The night had well and truly set in and we needed to use head lamps to guide us along the winding creek. We tried not to use the light directly on the water as the shallow gin clear creek held feeding fish that were searching the edges in the low light where during the day they would not feel comfortable to do so. Jack, Tallis and I all had all one fish on the board and the filming was going great when we neared a deep rocky bend that looked the goods. I positioned myself down stream of a willow tree and some submerged timber and proceeded to cast my 100mm Strikeforce Boof bait upstream working it past the willow tree and through the sunken timber.

The first and second cast worked through the danger zone unscathed and I was chatting to jack who was working the front of the willow tree when my Boof bait was detonated upon by a monster fish that sounded like someone had thrown a cinder block over my shoulder and had landed it 10 feet from my rod tip. The sheer volume of the explosion and the amount of water the fish moved indicated a truly monster Murray Cod bigger then anything I had caught on surface before. The rod had loaded just for a brief moment then nothing! I wound in my line and checked over my lure for teeth marks and to my surprise not a single scratch.

I was pretty sure the fish had not felt the hooks so I placed my cast again in the same line of fire and upon the same spot where the lure was hit before a large boil came to the surface, but no hit. The fish was obviously spooked or shy about my offering. This creek was tiny and we had yet to ever catch a fish over the mid 70’s from it, but this fish was well and truly beyond 80cm! With Jack standing beside me and Rhys capturing the sound on camera we were in shock as to the crack this fish made. Both Rhys and Jack were guessing that it had to be over 90cm, but we weren’t even sure if fish of that size were around in this tiny creek.

Rather than risk spooking the fish any further I decided to move upstream to the next pool to allow the big fish to relax in hope in a couple hours it would take my offering again. We were all in shock that this small stream, in parts was shallow enough to walk through with only getting your ankles wet was holding monster Cod, only hours before we were discussing just how big was too big when it came to lure size when casing these small streams – clearly there is no such thing as too big.

After a couple of hours I returned back to the spot and again positioned myself in the same location and placed my cast. The lure splashed down and slowly crawled, blooped and churned up the water.

On its way back it was again was exploded upon and ambushed by a bucket mouthed giant that proceeded to peel drag freely and at a massive rate of knots. This time the hooks stuck and this was a giant Murray Cod. The sound of the braid screeching and singing through the rod guides and my rod loaded from tip to cork. This gave me a very helpless sensation as the cod steamed toward the hidden timber that soon became very apparent when I turned on my head lamp on.

What I thought was only a few pieces of timber sticking out of the water in the darkness ended up being a labyrinth of fallen timber and willow roots. The big green fish dove deep into the hidden maze but after some fancy foot work and a lot of thumbing of the drag I managed to pry the fish out of the timber at least 3 times before we had a shot at slipping on the lip grips. Even then once the grips were secure the Cod shook his big head and bent the grips with ease requiring us to thumb grip the cod to secure it for a quick photo and a measurement. I couldn’t believe this absolute beast, what a magic moment it was! And I was so lucky to be in its presence because this fish dictated the fight and between Jack and I it looked like it was all over, countless times. But somehow we managed to keep the big girl away from the timber!

Once all the photos were taken and the big fish released we all stood around congratulating each other and standing in a state of bewilderment of what just unfolded in this very small stream. The seemingly small piece of water had just produced a stunning 102cm Murray Cod and had reduced one angler into a shaking mess. 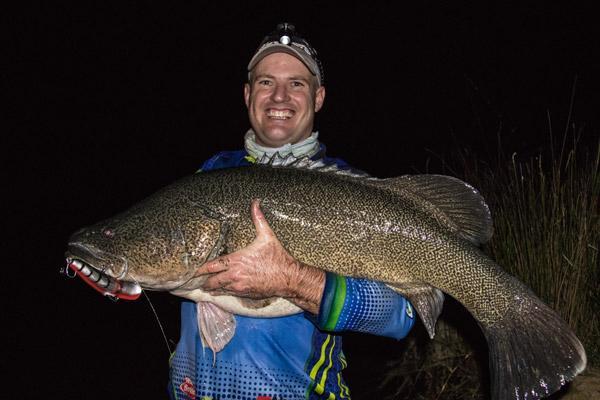 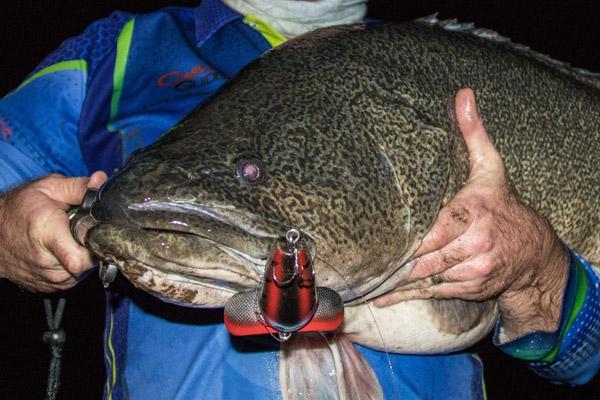 The 100mm Boof Bait was pinned firmly in the corner of this monster jaw!

Catching fish like this in those types of conditions is by far not a solo job and I have no doubt that without the help of Social Fishing’s team member Jack I would not have had the opportunity to hold this beautiful fish. So with that I would like to say big thanks firstly to Strikeforce lures for producing the best surface lure I’ve ever used, Jack for helping me land the green beast and Rhys for taking the great footage that I will have for the rest of my life.

And to the readers I hope this inspires you to get out there and explore some new water in hope that you find your own small water giant.

Good luck and Fish On!