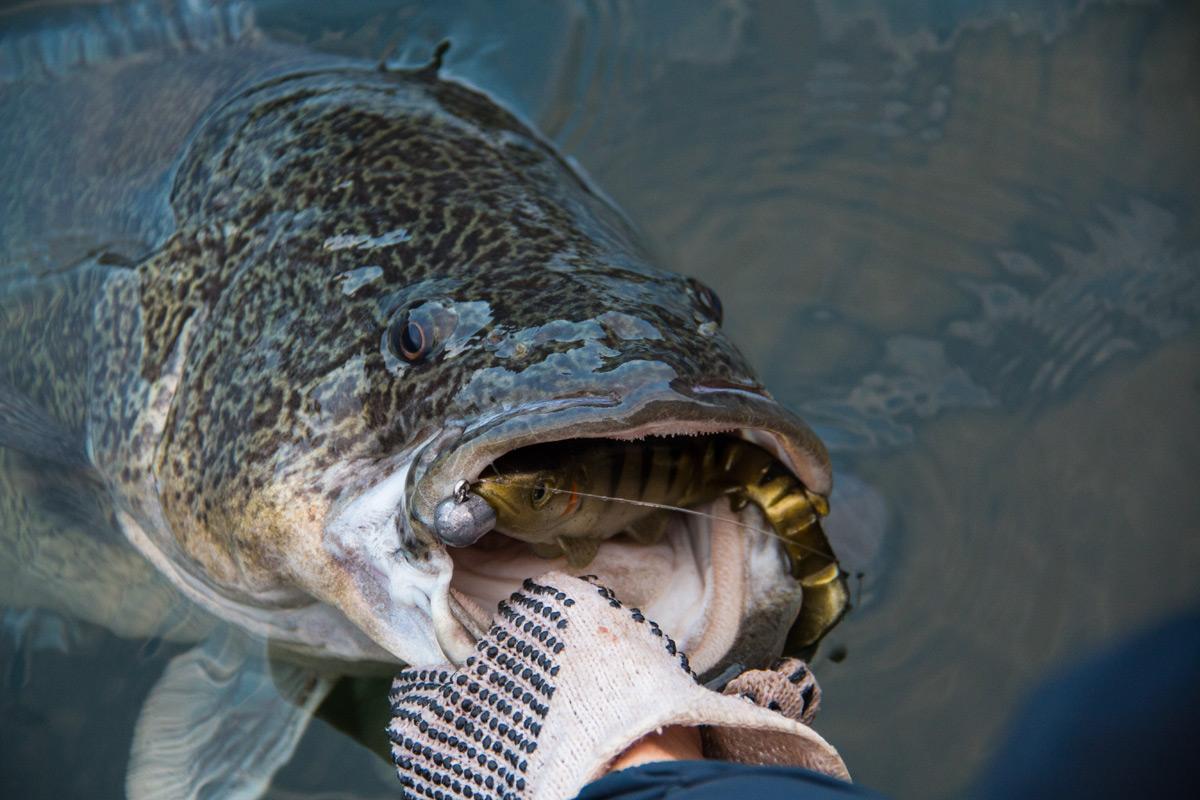 Soft plastics have entered the market as a successful lure on many species lists. The Golden Perch and Redfin love the soft plastics and so do most other freshwater fish. In saying that it is very rare to see or hear of anyone using soft plastics to target Murray Cod, yet alone successfully catching fish on them. I too had never cast a soft plastic in target of Murray Cod and I had never heard of anyone else doing the same, up until the end of winter in 2013.

Our First Cod Encounter with Plastics

It was late August in 2013 when I headed out on Blowering Dam with Ryan Shoesmith in search of some pre-season Golden’s. The water temperature was 12 degrees which is quite cool for active Golden Perch, although we were hoping to find some early spring Gold.

We fished hard for Golden’s all day long with very little success. Actually to tell the truth we didn’t see a Golden Perch at all. What did happen was one of the most memorable fishing experiences I will ever have. It was just after lunch and we had thrown everything at these fish. Ryan had decided to go finesse and throw a tiny soft plastic grub to see if he could interest a fish. While casting away at the standing trees not paying attention, Ryan’s 2000 sized spin reel began to scream! We thought he was onto a monster perch, until the fish surfaced after a tense and long battle. It was a pig of a cod that measured in at 80cm in length. Had to be pushing 30lb and of all things it ate a tiny soft plastic grub. We couldn’t believe what it had eaten such a small lure and thought maybe it was just an odd occurrence. Well that thought was put right to sleep later that afternoon when Ryan hooked yet another cod and this one was well over a metre.

The Theory behind Soft Plastics

This experience not only was incredible, but it made me open my eyes a bit and think about the situation that had just unfolded. Those fish had mouths the size of buckets that could swallow a 40cm fish or a duck, why would they eat such a small grub? I let the thoughts ponder over the next few years while still using spinnerbaits and hardbodies. Like always these lures still produced the results as they always will. Although in Blowering it was still difficult to find big cod, especially casting spinnerbaits during the day.

Towards the middle of winter in 2015 I was told by a college that he heard of cod being caught on soft plastics. I thought about what he said and it makes sense because Ryan caught and hooked monster cod on a tiny soft plastic years ago. I can’t see why using big soft plastics wouldn’t work.

I had an idea as to why they might be a better option than casting a spinnerbait. In Blowering (which is the dam we were targeting the cod) the water is crystal clear, with up to 5m in clarity at the end of winter due to low boat activity and snow melt. With such crystal clear waters the cod would feed using their sight and don’t need all the blades and vibrations to find the lure. (These vibrations work great on natives in dirty water where they cannot see.)

So therefore if the fish can feed by seeing the lure why not use something that is more natural and life like? Like a soft plastic. These lures would have to be the most life like lure on the market, although we don’t use them for natives as they don’t produce the vibration that the fish need to hunt it down. Another downfall of the soft plastic is they aren’t very snag proof, therefore not used by many cod anglers. Until now, I found a strong purpose and use for soft plastcis.

Putting the Theory in Practise

With the theory and evidence behind my idea I just had to prove that it would work. Mid-July was our first outing post winter and we set ourselves the challenge to persist with the soft approach. It was extremely difficult to stay confident using a technique that we weren’t sure was even going to work and what made it more difficult was the soft plastic produced minimal vibration. It feels like your winding in nothing and as a native angler you are used to feeling the pulse of spinnerbait blades or the thump of a Hardbody.

It was a freezing day and our expectation for Blowering Dam in the coldest month of the year were at the low end of the scale. Working our way into mid-morning along a grassy and what you would call boring bank Jack spotted the tip of a stick protruding through the water’s surface. It didn’t look like there would be much structure underneath until Jacks soft plastic bumped over a stick before being latched onto by a dead weight. After a few moments Jack realised it was a fish that grabbed his lure and he was on! His first call was, “It’s not that big”, as it was slowly coming towards the boat without making a fuss. My first reaction was to go for the net and I was happy that he had hooked a fish in winter – at this time of year any fish would make the day. As the fish slowly neared the boat I peered through the glare and spotted a monster Murray Cod casually beating his tail. The excitement level went through the roof as Jack had lost many monster cod in his time and his PB was 80cm. I could tell this fish was way over that mark and very close to the metre mark.

A quick and easy fight had the fish in the safety of the net. Jack cuddled the monster cod and yes it was a cuddle with a metery. The fish measured 100cm to the dot and it was a solid amount of proof that the plastics may be the secret weapon. 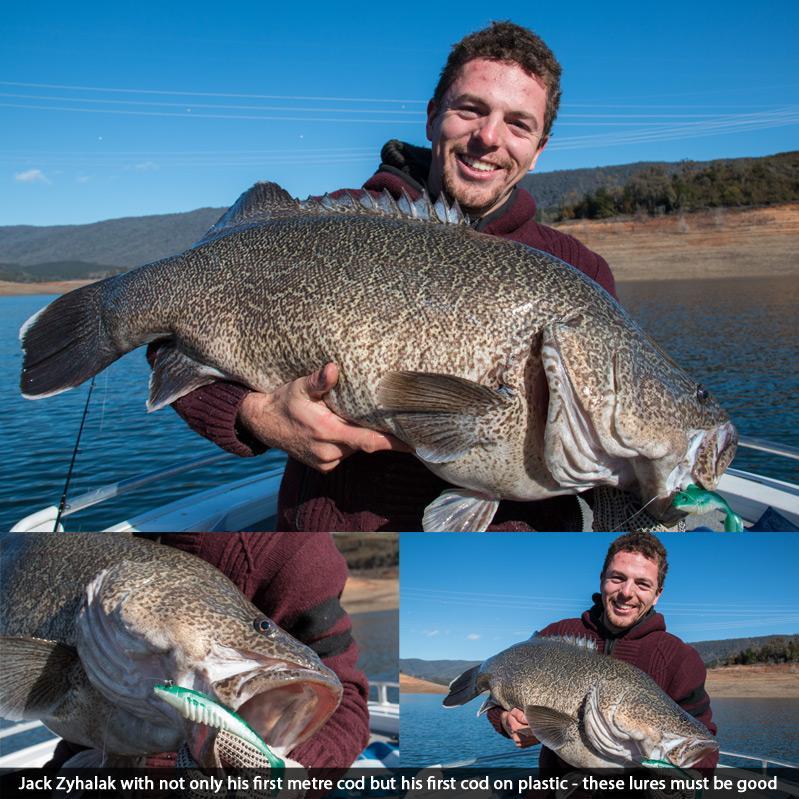 I managed to venture out for the next 5 weekends before the season closed and managed 6 more hits on large soft plastics, with 2 of them being landed and they measured 91cm and 100cm. It is something I feel will work extremely well in not only clear waters but also areas that receive a lot of pressure from anglers. Soft plastics wouldn’t have been seen by many cod and it could be the new weapon to get those old and intelligent fish to bite.

To find out more about the specific plastics, models, sizes, weight and colours that we have been having success on watch the COMPLETE GUIDE Series, Lure Fishing for Murray Cod in Dams – Pt 3 Lure Selection. In this video we cover every style of lure you need to successfully target Murray Cod in dams, including soft plastics.